Prelude to the Centre

A Committee was formed with Professor Satyanarayan Ghosh, Vice-Chancellor of Vidyasagar University as the President and Prof. Anil Kumar Jana of the Dept. of Political Science, Vidyasagar University, as the Secretary to pay homage to the illustrious son of Midnapore, Pandit Iswar Chandra Vidyasagar in his death centenary year. Vidyasagar, with all justifications, may be described as the central figure of the Bengal Renaissance that swept the rest of India in the nineteenth century. All by himself he launched a heroic struggle against the evils of illiteracy and superstitions to lay the foundation of a modern India. To celebrate the death centenary of this distinguished figure in a befitting manner. The committee took a year-long programme which started on 29th July, 1991 (with a colourful procession from the feet of the statue of Vidyasagar at Midnapore town) and culminated on the 29th July 1992.
To perpetuate the memory of this indefatigable worker in the field of education and social reforms , the committee, on behalf of the residents of Midnapur district prepared a plan of activities, besides strengthening and organizing Literacy Campaign in the district, which included among other things, the installation of a statue of Vidyasagar at the university campus, establishment of Vidyasagar Centre for Social Sciences, holding of serialised lectures by eminent academicians of the country at the University each year, and the like. The Committee also felt the need of introducing a Chair after the name of Vidyasagar (Vidyasagar chair) in the Bengali Department of Vidyasagar University who, according to Rabindra Nath Tagore, was “the first real artist of the Bengali language”. The Statute of Vidyasagar has already been installed in the campus by the Centre with financial support from the state government. Serialised lectures are being held regularly by the university. Vidyasagar Centre for Social Sciences, Midnapore is thus the outcome of the initiatives of the people of this district.

Vidyasagar Centre for Social Sciences (Midnapore) is purely academic and an apolitical organization (registered under the West Bengal Societies Registration Act, 1961) with its headquarter in the district town of Midnapore. The Centre was inaugurated by Professor Mohit Bhattacharya, the then Vice-Chancellor of the University of Burdwan on 3 April 1995 in a ceremony Presided over by Professor S. N. Ghosh, the then Vice-Chancellor of Vidyasagar University. The Vice-Chancellor, Vidyasagar University is the ex-officio President of the Centre. The board objective of the Centre is to encourage and undertake study and analysis of various social issues and problems that beset our society and its development. The centre will also explore diverse ways to acquaint people with the ideas of Pandit Iswar Chandra Vidyasagar and other social reformers and thinkers. The Centre, however, is not only to work on the theoretical plane. The centre believes that the motive force behind the explanation of social problems is to suggest and initiate the process of action for their solutions by developing the awareness of the common people and by involving them in the process to the greatest possible extent. The Centre proposes to undertake research and experiment in the field of social sciences and to organize regular discussions, lectures and seminars to facilitate the understanding of the multifarious issues that crop up from time to time. The Centre will also endeavour to demystify research in social sciences so as to involve common people in its activities. To this end, the Centre has been organizing seminars on different issues and topics, attended by people from all walks of life. An important programme of the Centre was to initiate immediate implementation of the tasks proposed by the Centenary Committee to the possible extent and the centre made simultaneous attemps in this direction. To begin with, it requested the West Bengal Government to sponsor the installation of a life-size statue of Iswar Chandra at the campus of the Vidyasagar University which the government acceded. The university authority at the initiative of the centre came forward to identify the place of the proposed statue and incourse of time the statue was installed at the active initiative of the centre and funds from the Government. The second major achievement of the centre was the publication of the Journal. The inaugural issue of the journal of the Centre, Samaj Jijnasa was published in 1996. Since then attempts are being made to publish the journal annually on regular basis. Besides, the Centre also makes attempt in right earnest to publish occasional papers, newsletters and monographs for the circulation among the interested people on the findings of the Centre in the fields of social sciences. The first such monograph based on the deliberations of a seminar held on 21 September, 1995 was published on an experimental basis. The Centre was entrusted with the task of internal evaluation of the Basic-literacy and Post-literacy programmes of this district twice and had completed the evaluation-works successfully involving some 3.26 lakh learners spreading over 54 blocks and 12 municipalities. The Centre was also chosen by the Election Commission of India as an NGO to conduct the Voter’s Awareness Campaign in this district. The Centre also proposes to study the nature and intensity of the problems faced by the tribal community spread over different regions of the district. The Centre, thus, is poised to act as a catalytic agent in the process of development and in the fight against social maladies in this part South West Bengal.

Members of the First Executive Committee

Certificate of Registration of Societies 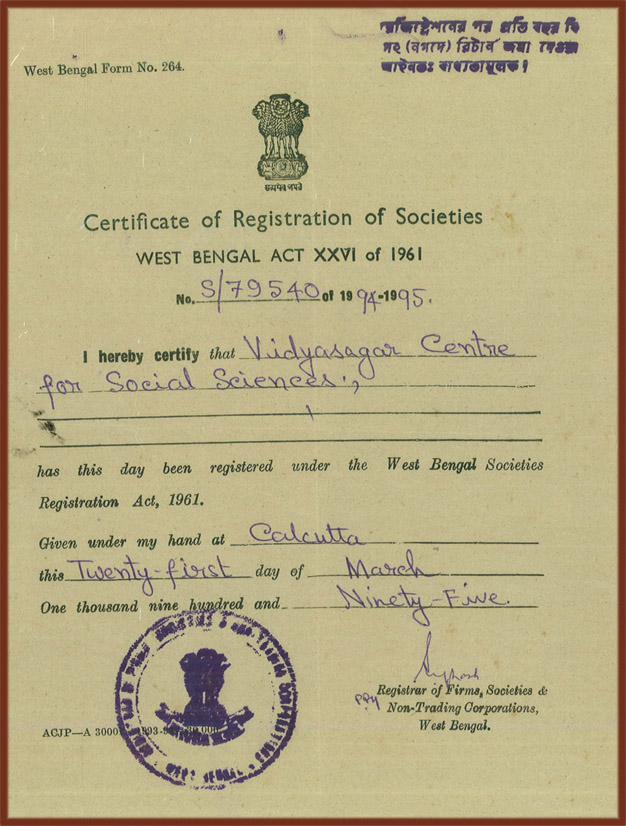